I don’t spend a lot of time on Capitol Hill, so I’m not super familiar with the dog-friendly spots in the neighborhood. I know the Summit Public House allows dogs, as I was there with Bondi way back in January 2010!

It was one of my first experiences bringing Bondi to a dog-friendly establishment, and I really enjoyed it, but I don’t believe I’ve been back since. Too busy exploring other places, I suppose…

Anyway, this spring my softball team is playing in a Cap Hill league, so over the last couple of weeks I have had the opportunity to scout some new DogGone spots. I have to say, I have been really excited to discover quite a few “new” (to me, anyway) dog-friendly establishments.

First, last week I spotted a dog in Linda’s Tavern. I was able to verify that they do allow dogs (preferably smaller ones, though well-behaved big dogs are welcome too). This is pretty cool, since Linda’s is arguably one of the most popular watering holes on Capitol Hill.

So, yesterday before our softball game, I brought Bondi with me to meet a girlfriend for a beer (I highly recommend the Nitro Left Hand Milk Stout). I thought I’d ease my way into the new scene, so instead of bringing both of my 80 lb dogs, I left Homie in the car.

Bondi was a good boy. He stayed under the table, dutifully cleaning up any scraps and morsels left behind by other patrons. He says he likes Linda’s!

Then, during our softball game last night I heard another player say she’d seen a dog inside Bill’s Off Broadway, which is actually just half a block east of Linda’s!

OMG, two dog-friendly establishments on the same block?? This sounded too good to be true… but just to test our luck, Joe and I wandered in with Bondi AND Homie after our softball game.

I couldn’t believe it! Not only were the dogs welcomed, but they were adorned with pets and treats and love and affection. We couldn’t have felt more comfortable!

Also, about Bill’s… They have the delicious Boundary Bay Scotch Ale on tap. Love. AND, the pizza is A-freakin-MAZING. We had a large pineapple-artichoke heart-jalapeno pie, and it was possibly the best I’ve ever had. Seriously.

Bondi really wanted to taste the delicious pizza, but he had to use his good manners. He said he thought it *smelled* really good.

Anyway, I will share more on these awesome dog-friendly spots over the next few weeks once I have more time to formalize my opinions. But, I think it’s safe to say we’re well on our way to a few more 5-Paw ratings! 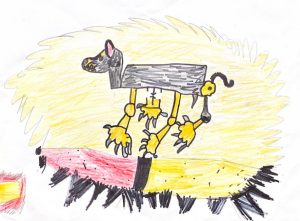